One of the many parents of ex-students of a "Gulen Inspired" charter school with Sibel Edmonds, the former FBI Turkish Translator turned whistleblower.
Posted by Gulen is a Fraud at 1:14 PM 1 comment:


ISTANBUL, Turkey May 27 2012 (Garowe Online) – Puntland and Galmudug have withdrew from the upcoming Istanbul conference at the end of the month sighting that it is not a Somali-owned process, Garowe Online reports.
Both Puntland President Abdirahman Mohamed Farole and Galmudug President Mohamed Ahmed Alim signed a joint press statement on Sunday cancelling their participation to the Istanbul conference on May 31 saying that the conference is "politically motivated".
In the joint press statement both governments said that after much consideration they realize that that the “Turkish role in Somalia objects to consulting the Somali people”. According to the statement the Turkish role is also misbalanced and not transparent enough.
The statement also says that the Turkish government sidestepped regional governments and institutions and invited civil society groups from Somalia to a conference in the Turkish capital.
According to the statement the purpose of the conference was “ambiguous”, and leaders from the TFG and regional states did not know the intentions of the conference, that will be attended by UN Secretary General Ban ki Moon and officials from the African Union.
A centralized Somalia
Government officials who spoke to Garowe Online said that the actions of the Turkish government have given the impression that Turkey is in favor of a centralized Somalia. This has upset officials who thought Turkey was committed to the current roadmap in Somalia.
Last month Turkey’s Foreign Ministry’s spokesman Selcuk Unal said that the Turkish government had a four step approach for Somalia that included assisting the UN backed Transitional Federal Government (TFG) of Somalia to reach a democratic agreement.
Earlier this week, signatories of the previous agreements, with the international community watching closely wrapped up a meeting in Addis Ababa where issues regarding the Roadmap and the constitution were deliberated over. After amendments to the Somalia draft constitution were made and mandates were clarified, an agreement was signed.
In Sunday’s press statement Puntland and Galmudug leaders said that the Istanbul meeting defied all previous agreements signed by leaders from the TFG, Puntland, Galmudug and Ahlu Sunnah. According to the officials the upcoming meeting tried to limit authority of regional governments and was anti federalism.
Funding to Somalia?
Over the past year Turkey’s government has been trying to play a greater role in Somalia. It established an embassy in Somalia and regular flights to the war-torn capital Mogadishu.
Funding has increased significantly to Somalia with the Turkish government giving close to 400 million dollars in assistance to Somalia over the past year. The Turkish government also promised dozens of development projects for Somalia including hospitals, schools, scholarships, and infrastructure.
However officials in Galmudug and Puntland say that tangible development projects from Turkey have not reached their constituents. Puntland officials say that Turkish funds are being deposited into the central government based in Mogadishu and regions across Somalia have seen little to nothing.
Turkey has visited Puntland and Galmudug and has promised Puntland developmental projects targeting infrastructure and promised to reconstruct roads but according to officials, nothing has transpired.
Compromise with Al Shabaab
Last April, Turkey’s Foreign Minister Ahmet Davutoglu said that his government has not given up on pushing for talks between Al Shabaab and the TFG. The Minister said that he felt that a peaceful resolution could be reached and that Turkey could play a role in arbitrating that agreement.
“Despite our advantage and special relation with Somalis of all stripes, Turkey would play a role in mediating conflicting parties in Somalia," said Minister Ahmet last April to Turkish radio station.
Even after Al Shabaab officially joined the terror network of Al Qaeda, Turkey has pushed for a peaceful resolution. The proposal the Turkish government has been driving conflicts with the international community’s policy of no dialogue with terrorist organizations.
Leaders have urged Al Shabaab to put down their weapons and turn themselves into government authorities, but neither the TFG nor regional governments have proposed talks with the terror group.
Turkey denies any ulterior motives in Somalia and maintains that facilitating peace to the war ravaged country is its number one foreign policy.
Minister Ahmet reiterated on Sunday at the Somali civil meeting in Istanbul, that Turkey’s policy in Somalia is to promote stability both economically and politically. But Puntland and Galmudug governments say that that policy contrasts with what the conference in Istanbul proposes.
http://www.garoweonline.com/artman2/publish/Somalia_27/Puntland_and_Galmudug.shtml

Gulen Politicians - aka "Useful tools of Gulen": Gulenist Turquoise Council to host trip for 150 la...: ﻿﻿ Florida State Representative Gwyndolen Clarke-Reed to travel with 150+ representatives from the U.S. including State Senators, State Re...
Posted by Gulen is a Fraud at 11:33 AM No comments:

Erdogan sides with Generals, may signal split with Gulen 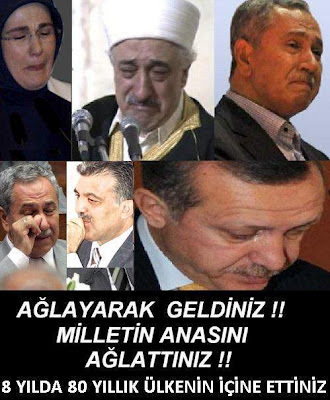 ﻿
http://www.bloomberg.com/news/2012-05-27/erdogan-siding-with-generals-may-signal-islamist-split.html#disqus_thread
Prime Minister Recep Tayyip Erdogan’s rare expression of sympathy for Turkish generals this month may signal a split with Turkey’s most powerful religious movement, undermining the unity of his government.
Erdogan, who has backed a series of inquiries into alleged coup plots that have left hundreds of army officers in prison, was critical of the latest probe, saying it was “unsettling” the country. Previously, he blocked an attempt by one of the investigations to interrogate Turkey’s intelligence chiefTurkey's Prime Minister Recep Tayyip Erdogan

Email ThisBlogThis!Share to TwitterShare to FacebookShare to Pinterest
Labels: Erdogan grabs for power, Erdogan will keep power from Gulen., Gulen being pushed out of Turkey power, Gulen vs. Erdogan

Posted by Gulen is a Fraud at 4:21 PM No comments:

Posted by Gulen is a Fraud at 2:50 PM No comments:

Erkal Tülek: Inside The Gulen Education Movement in Turkey And Internat...

Gulenist trial in the Russian side of Kazakhstan

Orenburg, May 21, Interfax - The Orenburg regional prosecutor's office has endorsed the bill of indictment in the case of a 25-year-old graduate of an Orenburg higher educational establishment suspected of organizing a unit of the outlawed extremist organization Nurcular.

The defendant and Asylzhan Kelmukhambetov formed a local branch of Nurcular in Yekaterinburg in the period from April 2008 to March 2009, the prosecutor said.

Turkish citizens - teachers of an Orenburg medrasah - involved Kelmukhambetov in the illegal activity.

"They spread the ideas of the religious organization amongst Islamic students of medium and higher educational establishments in the regional center," the report said. "They opened medrasah in rented apartments to study books by the Nurcular founder, Turkish author Said Nursi, the organization's modern leader Fethullah Gulen and other extremist books."

Criminal charges against Kelmukhambetov were brought in March 2009, and his accomplice was charged in 2010. However, he escaped from the police.

The Russian Supreme Court declared extremist the international religious movement Nurcular and banned it in Russia on April 10, 2008.
http://www.interfax-religion.com/?act=news&div=9373
Posted by Gulen is a Fraud at 11:57 PM 4 comments:

Gulen Charter Schools in the USA: Truebright Science Academy A Gulen Charter School ...: Forget it Gulenists, signs, slamming comment boards and lies will not save the schools Bekir Duz, leaves a trail of lies and causin...
Posted by Gulen is a Fraud at 2:44 PM No comments: