Gulen Movement launches new Turkish School in Chad, Africa and many more Turkish business to extract resources out of Africa 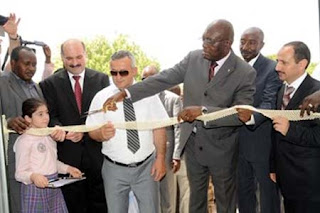 A new school building has been launched under the umbrella of Chad-Turkish Educational Institutions active in the central African country Chad, saved from the brink of revolution in early May. In attendance of the grand opening of the school founded by the deceased philanthropist Ahmet Guner from Duzce (a province in Turkey) in the capital N'Djamena were Chad's prime minister Joseph Djimrangar, minister of education Abdelkerim Seid Bauche, Turkey's ambassador to Chad Ahmet Kavas, the founder Guner's son Murat Guner and a crowded group of guests.


PM Dadnadji arrived at the school launched in a critical period, which witnessed a revolution attempt foiled by the state, under high security measures. Chad police department took extensive security measures in the area surrounding the ceremony venue.


Following the national anthems of both countries, the president of International Chad Educational Institutions Huseyin Serce noted that their educational initiatives kicked off with only 17 students in 2001 have been continuously growing ever since and added all they seek is to offer a higher quality education to Chad.


Murat Gungor, on the other hand, recalling his father couldn't live up to see the school's opening said they, as children of Ahmet Guner, will definitely continue the services handed down to them.Next, Turkish Ambassador Ahmet Kavas noted these educational activities are investments for future bilateral relations. The minister of education Abdelkerim Seid Bauche alike said bilateral relations in the future will be shaped by today's ongoing efforts performed in education. He further said Chad-Turkish schools function as bridges between the two countries and they greatly appreciates the schools' activities.


Following the remarks, PM Dadnadji cut the ribbon of the building with 430-student capacity. The construction launched in 2011 cost approximately 3 million dollar. As the most modern education institution in Chad, the school comprises library and language classrooms alongside the computer and science labs. Dominated by local teachers, the academic staff offers Arabic, French, Turkish and English courses. The poem performance by a little Chad student and the local guests in their traditional clothes added color to the ceremony.


Source: [in Turkish] Timeturk, 17 May 2013. English translation is retrieved from HizmetMovement.Com
Posted by Gulen is a Fraud at 9:54 AM No comments: 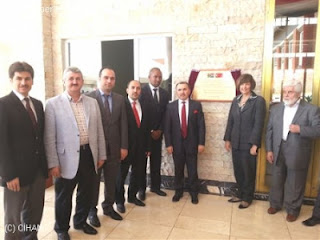 
Managers of Gaziantep based Caliskan Group and South Africa based Sumo Coal, brothers Israfil and Semsettin Caliskan, have constructed a 500-student capacity school in Pretoria, the managerial capital of South Africa. The inauguration of Star College was performed by the minister of education of Gauteng province, Barbara Creecy, in an opening ceremony hosted by a former Fenerbahce midfielder Johan Moshoe.


The ceremony started by Moshoe with Turkish jokes. Moshoe, who is currently the coach of Star College soccer team, talked about his love of Turkey, where he spent his 11 years. Students sang Turkish songs and dance show of little ones received great applause from the audience.


After offering his gratitude to Turkish investors for donating a large education complex to the capital, Mosheo invited Fatih Caliskan who was representing his father Israfil Caliskan, and Semsettin Caliskan to the stage. Greecy presented Caliskan brothers with a plaque of appreciation, and said: First of all, I would like to thank you very much for gifting us with this magnificent building. I would like to thank Ufuk [Horizon] Education Foundation who has opened 8 education centers in South Africa. The school that we are inaugurating now will be a flagship of others. But I hope that it will not be the last one and you will open more schools. Turkish schools do not only provide students with just an academic education they also prepare students for the society by not neglecting important aspects of education such as sports, personal development, family and adaptation to social life, and universal code of ethics. Turkish schools successfully educate out kids on topics of great importance to us such as math, science, and technology. In this respect, they serve as a model for education in South Africa. We have sent a delegation to Turkey to study your method of education.


Following the opening ceremony, the guests were served with delicacies from Turkish cuisine.


Disclaimer: The original article is in Turkish. Slight deviations from the original meaning may have occurred due to the difficulties in translating phrases and idioms. PII volunteers translated the article.

http://www.hizmetnews.com/index.php/latest-news/item/989-turkish-businessmen-gift-another-school-to-south-africa
Posted by Gulen is a Fraud at 9:45 AM 1 comment:

The Gulen Movement by BBC