NO LONGER ABLE TO PERFORM IN TURKEY,

IFLC at ELLIPSE PARK April 26th
The end of April brought celebration throughout Washington, D.C as more than 100 students from 17 countries and 4 American states gathered together to showcase their talents. On April 26th, over 1,500 spectators gathered upon the ‘backyard’ of the White House to witness the rich multicultural diversity of our world as part of the 2015 International Festival of Language and Culture. With the national mall as a backdrop, the President of the Rumi Forum, (co-organizer of the event along with the Turkic American Alliance) Emre Celik took the stage welcoming those in the audience and those huddled backstage eager to perform. Mr. Celik  urged everyone to “reflect upon the importance of increasing our understanding of people of all backgrounds and showing due respect to the difference and diversity that exists.” and that “It is the beauty in difference that allows the mosaic of our humanity to shine and prosper…”
The performances began with participants from Albania singing the theme of the IFLC with ‘Colors of the World’. Other participants included youth from Thailand, France, Texas, Washington DC, Azerbaijan, Ukraine, Serbia, Tunisia, South Africa, Kazakhstan, Bosnia and India. Further on in the show Bosnia, Kosovo, Serbia and Albania did an uplifting joint performance, singing ‘Heal the World’, with other youths eventually joining them in support on stage. The event concluded with the final performance of the song ‘Universal Peace’ where all the participants gathered on stage in an expression of friendship and hope for the future.

IFLC at WARNER THEATRE April 28th
The main event of the International Festival of Language and Culture was held on April 28th in the historic Warner Theater in downtown Washington, D.C drawing over 2,000 spectators. IFLC has been hosting its language and culture festival for the past 12 years, each year drawing in participants from over 160 countries across the globe, with over 1,000 student performers each year at numerous regional events worldwide. In its 13th year, the IFLC was brought to the nation’s capital who is one of the many cities co-hosting this international event.
Among those who attended the festival were U.S. Representatives BIll Pascrell (NJ), Mark Takai (HW), Jeff McNerney (CA), Michael Capuano (MA), Randy Weber (TX), Donald Payne Jr. (NJ) and Henry Cuellar (TX), former Congressman Lincoln Davis (TN) as well as former Attorney General Clarine Nardi Riddle, and NBA Oklahoma Thunder’s, Enes Kanter, while the star of TV shows Community and The Soup, comedian Joel McHaleemcee the event. Several government officials and ambassadors could also be spotted in the audience. The countries which were represented at the Festival were Albania, Azerbaijan, Bosnia and Herzegovina, France, Germany, Indonesia, Kazakhstan, Kosovo, Lesotho, Mongolia, the Philippines, Serbia, South Africa, Thailand, Tunisia, Ukraine and the U.S., which was represented by participants from Arkansas, Maryland, Pennsylvania and Texas.
The students opened the event with the festival’s de facto anthem ‘Universal Peace’, after which Joel McHale invited Dr. Faruk Taban, President of the Turkic American Alliance (TAA) onstage for opening remarks. In his speech he thanked all of the volunteers, sponsors, guests, most importantly the students and their teachers, the TAA staff, including the support of all the sponsors MAFTAA (Mid-Atlantic Federation of Turkic American Associations), ATFA (American Turkish Friendship Association) and the Rumi Forum. The Director of Interfaith & Intercultural Affairs at the Rumi Forum, Jenna Luedtke was then invited on stage to read a message for the event from the Rumi Forum’s honorary President, Mr. Fethullah Gulen:
Our world suffers from numerous forms of iniquity and decay. The one thing that remains pure and untainted is love. There is nothing more real and everlasting in any society, than love.
What is more dazzling than love itself, is the expression of love by children who radiate love through the purity of their hearts. Wherever this internalized love is expressed through the language of presence, all other sounds cease, all instruments stop and only the melody of love is heard.
Children who are participating tonight, who blossom all around the world as flowers of love, give a message to all of humanity with their presence. They demonstrate, under the wings of the love of humanity, that we can all live in peace and tranquility, we can all see diversity as treasure, and we can all enrich ourselves through our interactions with one another.
As they grow through their involvement in activities such as the international language and culture festival, they also serve world peace through the magic of their poetry, the power of their rhetoric, the charm of their verse, and through the universal language of music.
Blessed are the teachers who nurture the future generations with the elixir of love!
Good tidings to those who walk the journey of life with love as their guide!
And thousands of thanks to their hosts who welcome these children from around the world, poised to build the future of humanity!
Throughout the night over 20 performances graced the stage and were met by a supportive audience who enthusiastically applauded their amazing talents, including their message of peace and co-existence. Enes Kanter shared his thoughts during a short break and expressed how happy he was to be there, as he graduated from one of the schools affiliated with the IFLC. To close out the festivities the students joined together in performing ‘Universal Peace’ one more time. Afterwards, guests had the opportunity to meet the performers and take pictures.
The 14th Annual International Festival of Language and Culture went viral with the #ILFC2015 spreading across the different social media outlets. In addition, Mustafa Akpinar, Principal of the Pinnacle Academy, along with several student performers were guests on ABC 7 Morning News with Adurey Godfrey.

IFLC at CAPITOL HILL
As part of the International Festival of Language and Culture, students took to Capitol Hill in Washington, D.C to showcase their performances in the Cannon House Office building to an excited audience of 17 U.S Representatives and over 150 congressional staffers. The Hill enjoyed the diverse and engaging performances from students from 20 different countries, bringing unity and cooperation to their halls. The students opened with a riveting performance of ‘Colors of the World’ while the audience sampled some Turkish cuisine presented by the sponsors of the IFLC. After the performance they had the unique opportunity to personally connect with the students. Including those in attendance were Jan Schakowsky (IL), Thom Tillis (FL), Darrell Issa (OH), Mike Honda (CA), Charlie Dent (PA), Ileana Ros-Lehtinen (FL), Alan Grayson (FL). All praised the immense talent that the performers showcased, including the diverse nations they represented, with Congressmen Dent commenting that “it is very important to have these types of cultural exchanges…the IFLC is soft diplomacy at work.” Some Representatives even took the opportunity to take a selfie with all the students up on stage!
The students who came from all over the world to perform their talents multiple times in front of huge audiences in the nation’s capital said that it was friendship that truly brought them to the U.S. and it is the new friendships they made while they were here is what will bring them back.
Performers also had the opportunity to tour the White House and witness the rich history of Washington D.C from a boat cruise down the Potomac River.
The Rumi Forum extends their gratitude to all of the sponsors involved in putting this event together including TAA, MAFTAA, and ATFA, and the community for all its support
.

Posted by Gulen is a Fraud at 2:05 PM No comments:

Gulen Schools in Tajikistan are the latest to close 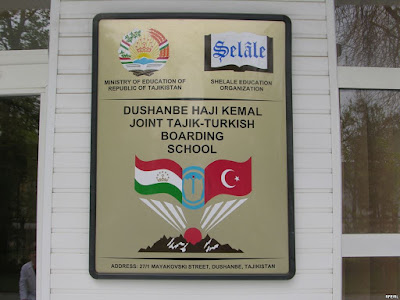