Posted by Gulen is a Fraud at 6:49 PM No comments: 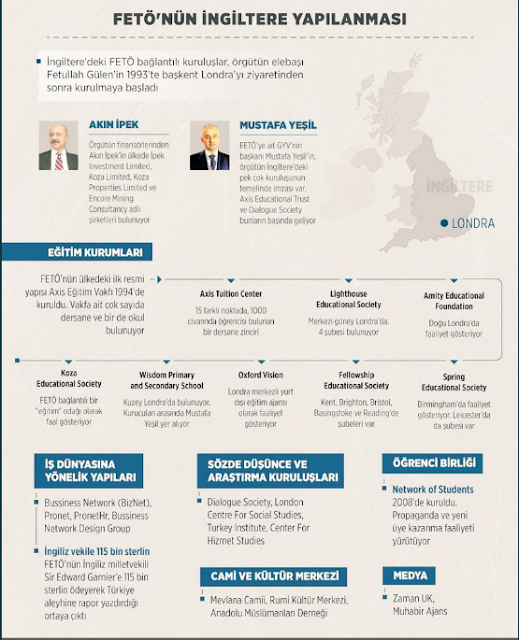 "They will take us into custody if we return to Turkey" - Gulen Kazakhstani teachers complain...Schools closing & renamed Gulenists to be kicked out.

Yakub Doganai came to Kazakhstan from his native Turkey 18 years ago to work as a teacher at a private school in the capital, Almaty.
Like other foreigners, Doganai has had to renew his visa every year, normally nothing more than a bureaucratic nuisance.
Until this year.
"I've work at Suleyman Demirel University since arriving in Kazakhstan. For the past two months, I worked at the Eurasian Technological University after being invited to teach there. They tried to extend my visa at the university, but were unable to," explains Doganai.
And he was not alone.
"About 30 to 40 teachers can't get visas. Some have expired passports as well. The Turkish Embassy won't issue them new passports," Doganai adds.
Finally, the Migration Service of Kazakhstan delivered him the news: Dogania and his family had to leave the country by September 26 due to the expiration of his visa.
Like other Turkish citizens in Kazakhstan, Doganai suspects the refusal of Kazakh authorities to extend his visa has nothing to do with his work but rather geopolitics between the two friendly states.
Back home in Turkey, observers say authorities have cracked downed on anyone suspected of being connected with last year's failed coup, arresting and jailing literally thousands.


Amid an atmosphere of fear, suspected sympathizers or supporters of the U.S.-based Turkish preacher Fethullah Gulen have been singled out in what critics liken to a witch hunt.
Turkey accuses Gulen of masterminding the July 15, 2016, coup attempt, a claim he rejects.
Ankara is unconvinced.
And as Doganai's case attests, it's not only Turks at home who are being targeted.
"It seems we're being treated the same way in absentia. But where is Gulen, and where am I?" Doganai asks. "I'm not some youngster who would blindly follow something that was allegedly said by Gulen. I'm a professor with a respectable position."
But Turkish authorities appear especially suspicious of Turkish citizens working at schools abroad, claiming many of the institutions are linked to Gulen.

In November 2016, Pakistan ordered out more than 100 Turkish teachers who worked at Pakistani-Turkish schools that Ankara accused of having ties with Gulen, something the schools all denied.
In Kazakhstan, there are 27 Kazakh-Turkish lyceums, or private secondary schools. Established by a bilateral 1992 agreement, the schools have a reputation for high academic standards.
Nevzat Uyanyk, the Turkish ambassador to Kazakhstan, claimed in June 2016 that Gulen "cells" were operating in Kazakhstan and called on Astana to shut down any school "linked with Gulen."
Kazakh President Nursultan Nazarbaev assured Turkish President Recep Tayyip Erdogan in August 2016 that a special commission comprising Turkish and Kazakh specialists would vet the schools.
Shortly after, Kazakhstan Education Minister Erlan Sagadiev announced the institutions were clean, "operating in strict accordance with our standards."
Later that same year, Nazarbaev announced 11 Turkish teachers had been repatriated to Turkey after their role in the failed coup had been "proven." He added, however, that those remaining Turkish teachers in Kazakhstan were innocent and would not be sent back unless Ankara provided evidence proving otherwise.
However, such assurances by Nazarbaev, who has ruled oil-and-gas rich Kazakhstan since before the collapse of the Soviet Union in 1991, appear to be increasingly hollow.
The well-known Kazakh scientist Askar Zhumadildaev told the magazine Qazaq Adebieti that, due to the current political climate, 20 Turkish professors with whom he worked at Suleyman Demirel University had left Kazakhstan.
Olzhas Kudaibergenov, an economist and member of the board of trustees at the NurOrda international school, claims teachers returning to Turkey from Kazakhstan face jail without trial or investigations. He has urged Almaty to grant Kazakh citizenship to Turkish teachers.
Doganai says pulling up stakes and leaving Kazakhstan was difficult.
"I have four kids. The oldest is 19; the youngest is 6 years old. It was difficult for me and my wife to deal with having to leave into the unknown. We're used to Kazakhstan, its language and culture," Doganai says.
Like others, Doganai denies any role in politics and fears what may await him back in Turkey.
Social media has become an outlet for Turkish teachers in Kazakhstan to share their fears and seek out support.
Anes Kurtai, another Turkish teacher forced to leave Kazakhstan, was pictured in a Facebook post on October 1 posing with his students in an apparent final photo before departing the country.
Kurtai arrived in Kazakhstan in the early 1990s to work as a teacher, social-media posts suggest.

Mustafa Demir believes Turkey has unleashed a witch hunt for suspected supporters of cleric Fethullah Gulen.
Mustafa Demir worked at a Kazakh-Turkish lyceum before leaving three years ago for Indonesia, where he now lives in Jakarta. He says Ankara has unleashed a witch hunt for suspected supporters of Gulen.
"I haven't visited my parents in Turkey for three years. There's no rule of law there. They'll take us into custody if we go there," Demir says. "Teachers at schools in Kazakhstan aren't the only ones affected, but Turkish teachers in Indonesia as well. The Turkish Embassy refused to extend our passports. Now, kids of Turkish citizens who were born in Indonesia don't have any citizenship."
Marat Tokashbaev, editor in chief of the pro-government President And People news site, says that despite promises by Nazarbaev not to return Turkish citizens to Turkey, the country's bureaucracy is throwing up roadblocks to make it possible to stay in Kazakhstan.
"They either need a visa or a residence permit so that they can continue to work here," Takashbaev explains. "Those who can't get one or the other have to file for asylum status at the embassies of either Germany or Sweden."
Political scientist Aidos Sarim says Turkish citizens living in Kazakhstan at least 14 or 15 years could be given political asylum and that 30 to 40 teachers could be granted Kazakh citizenship for their "contribution in the field of education."
Sarim accuses low-level bureaucrats of failing to follow Nazarbaev's orders.
"Society and the government have sympathy for the plight of the Turkish teachers," Sarim says. "But those who have the power to do something about this don't."
https://www.rferl.org/a/kazakhstan-turkey-teachers-gulen-repatriation/28780416.html
http://hizmetnews.com/20289/gulen-linked-turkish-schools-kazakhstan-renamed/#.WdqkPWhSyM8
http://www.reuters.com/article/us-turkey-kazakhstan-education/kazakhstan-to-expel-teachers-linked-with-gulen-movement-nazarbayev-idUSKCN10G1PI?il=0
Posted by Gulen is a Fraud at 3:22 PM No comments:

After closing down the Gulenist operated schools in several countries, members of Hizmet are lingering in these countries.  Many locals are kidnapping the Gulenists and sending them back to Turkey to face justice, they don't want Gulenists in their country.  Mynanmar, Somalia, and now Pakistan are just a few of the countries that have kidnapped the remains of the Gulen Movement in their countries to dispose of them back in Turkey.
https://en.dailypakistan.com.pk/pakistan/former-turkish-principal-of-pak-turk-school-his-family-kidnapped-from-lahore/ 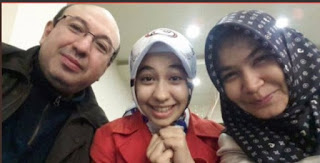 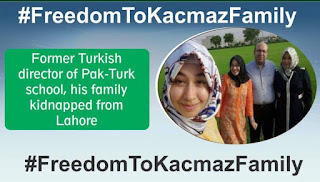 As per the details, Kacmaz and his family have been staying in Wapda Town, Lahore on a asylum seeker certificate of United Nations High Commission for Refugees (UNHCR) for a year after the Pakistani authorities in November 2016 directed the Turkish staff of the schools to leave Pakistan on the request of Turkey.
Turkish Ambassador to Pakistan Sadik Babur Girgin had said that the schools were linked with Fatehullah Gulen, a US-based cleric, who is being accused of plotting attempted July’s coup in Turkey by President Recep Tayyip Erdoğan.
One of Turkish person, who had also been abducted and released later, said that the incident took place at 2:10am on Wednesday. The released person said that he did not know where they have been taken as their faces were covered with some kind of bags.
The complete statement of the released person, Fatih Avci is below;
I am Fatih Avci, a Turkish language teacher by profession and currently an asylum seeker placed under the protection of the UNHCR since November 2016. I live upstairs from Mr. Mesut Kacmaz and his family. Mr. Mesut Kacmaz is a colleague and we both hold UNHCR asylum seeker certificates along with our families.

On Wednesday, September 27, 2017 at 2:10 am, I heard a commotion downstairs at our house located at 461, E2 Block, Wapda Town, Lahore. I rushed down and witnessed that the door to Mr. Mesut’s portion was open and there were about 15 plain clothed `police officers’ inside. Out of fifteen, five were lady constables. They did not conduct any search-and-seize procedure, nor did they turn the house upside down.
The `police officers’ were pushing and shoving to arrest them. I saw Mrs. Meral, Mr. Mesut’s wife, lying on the floor and two lady constables were pulling to get her on her feet. The couple’s two teenage daughters were weeping loudly and some other `police officers’ were trying to push Mr. Mesut, who was protesting the raid, towards the door. When I saw the sheer display of disproportionate power applied on Mrs. Metal, I protested and the `officers’ arrested me and took me downstairs.
Soon, the members of the Kacmaz family were brought downstairs. While they were making us climb into the Toyota Hilux squad pickups, the `officers’ blindfolded all of us first and later slipped hoods on our heads (including Mrs. Meral and their two daughters). I was handcuffed in the front. They could not handcuff Mr. Mesut, so they tightened a cloth strip around his wrists. Mr. Mesut protested and a scuffle happened. Mr. Mesut received some blows on his face.
We were made to travel in squad pickups. I could not see any title like `Police’ on the pickup. There were revolving roof lights, though. All of the `officers’ were in plainclothes.
We travelled about 30 minutes and when they removed our blindfolds, I saw that we were in a well-furnished bungalow. It looked like a guest house. There were other people there as well. I guess some them were senior ‘officials’. One of the ‘officers’ said to me, “You were not meant to be involved in this, yet you got yourself involved. We have nothing to do with you. Your name is not on our list. We will set you free.” They even removed the wall clock so that we should not keep track of the time.
They blindfolded me again and drove me back to the gate of the housing society where I live in, I was not wearing any footwear, so I walked barefooted back home. I could not see any number plate.
It was so shocking that for a family of four, fifteen ‘officers’ were deputed. What was more shocking was the treatment given to the family: blindfolding them all (including wife and children) and slipping hoods on their heads. We are ordinary educationists and being subjected to such a revolting treatment as if we were criminals is so appalling.
I have no idea who those people are and which organization they belong to.
According to police report, the action might have been taken by the counter terrorism department. The UNHCR is also closely monintoring the case as well.

Ali Yumlu @YumluAli
This is a picture of family Kaçmaz who has been kidnapped in Lahore.

Raise your voice against Erdogan's which hunt over the whole world! pic.twitter.com/JaWV2DFOee 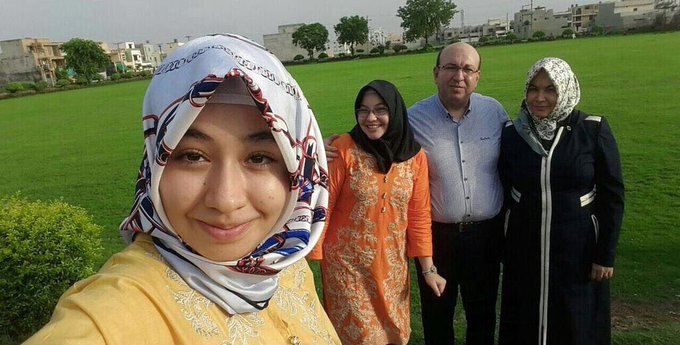 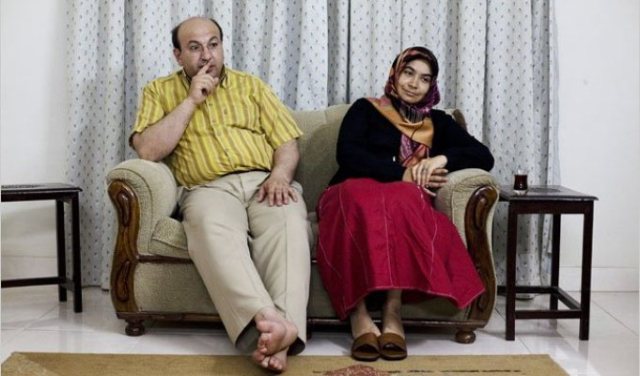 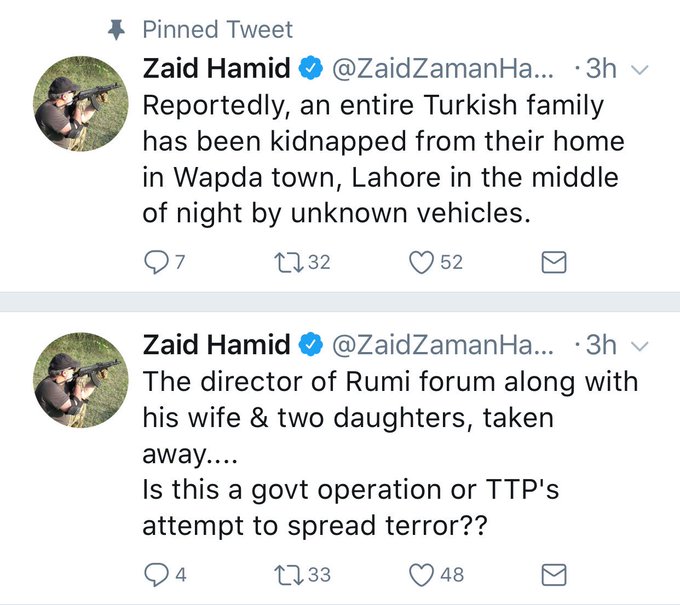 
Earlier, there was news that all the Principals of Pak-Turk Schools have been replaced by Pakistanis on the request of Turkish Envoy Sadik Babur Girgin.
The international affiliation has also been cut to detach these schools from any global influence.
In a chain of 28 Pak-Turk Schools and Colleges in Pakistan, around 11,000 student are studying. The project has been launched in 1995 by the Pak-Turk Foundation.
http://dailytimes.com.pk/punjab/07-Oct-17/lhc-extends-stay-on-deportation-of-turkish-teachers-for-two-weeks

Posted by Gulen is a Fraud at 8:58 PM No comments: