PAK-Turk schools ran by Gulenists are expelled from Pakistan, Schools to be taken over by Turkish government 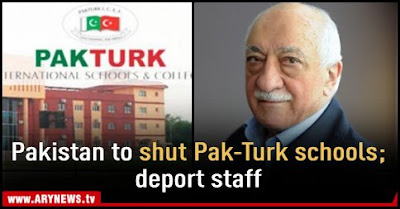 Pakistan has ordered more than 100 Turkish teachers at a chain of international schools to leave the country, with their families, by the end of the week.
The teachers work at 28 PakTurk schools which Turkey says are linked to US-based Turkish preacher Fethullah Gulen. The schools deny this.
Turkey accuses Mr Gulen of being behind July's failed coup, a claim he rejects.
Turkish President Recep Tayyip Erdogan, visiting Pakistan, welcomed the move.
In a statement, PakTurk International Schools and Colleges said the teachers and their families, who totalled about 450 people, had been asked to leave because of "non-approval of their requests for extension of visa".
What is the Gulen movement? 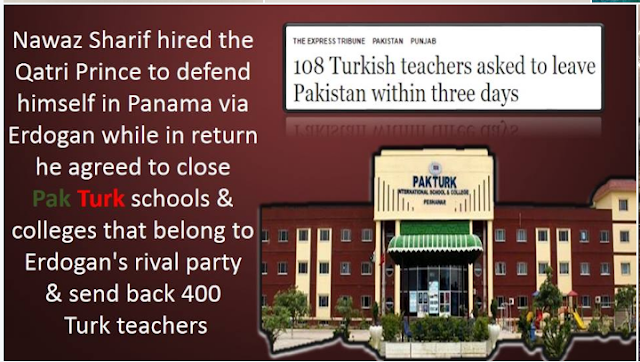 Who was behind Turkey coup attempt?
Pakistan's interior ministry has so far not commented.
The expulsions are not expected to stop the functioning of the schools as most staff members are Pakistani.
A petition by the school management challenging the decision is to be heard by the Islamabad High Court on Thursday, Pakistani media report.
Mr Erdogan described the decision by Pakistan as "very pleasing".

"They moved rapidly in the direction of ending the [Gulen movement's] presence in Pakistan and toward thwarting their attempts at unrest," he said at Ankara airport as he left for Pakistan.
"As you know, Pakistan has asked persons linked to the organisation to leave the country by November 20. This is very pleasing for us."
According to Pakistan's Dawn newspaper, Turkish Foreign Minister Mevlut Cavusoglu raised the issue of the schools during a visit to Pakistan in August and was told the matter would be investigated.
The Gulen movement, which the Turkish government has declared a terrorist organisation, runs schools all over the world.
Since July's failed coup, Turkey has cracked down on any individuals or groups believed to have links to Fethullah Gulen.
Tens of thousands of people from every level of society have been purged from their jobs, including senior military officers, government officials and school teachers.
Critics of President Erdogan say he has used the coup attempt as a way of removing his opponents.
http://www.bbc.com/news/world-asia-38005302
https://www.washingtonpost.com/news/worldviews/wp/2016/11/17/pakistan-is-set-to-expel-more-than-100-schoolteachers-at-turkeys-request/
http://www.upi.com/Top_News/World-News/2016/11/16/Pakistan-expels-Turkish-school-staff-over-alleged-ties-to-Tayyip-Erdogans-foe/7371479314575/

Posted by Gulen is a Fraud at 3:52 PM No comments:

Gulen Movement in the Balkans from Gulen Cemaat
ANSAmed) - BELGRADE, OCTOBER 26 - The Turkish government has sent a formal request to the Serbian government asking it to close all of the schools in the country sponsored by "Hizmet" religious leader Fetulah Gulen, said Mehmet Akarca, senior advisor to the Turkish president. In an interview with Belgrade daily Blic, Akarca said the Serbian government has sent "positive signs" on the request. Kudret Bulbul, president of the Turks Abroad organisation, warned Serbia of "threats coming from institutions under the control of Fetulah Gulen", whom Turkey claims is responsible for the country's July 15 attempted coup. "The Fetulah Gulen Organisation works worldwide and has its people in the Balkans," Bulbul said. "We know for a school in Belgrade, but we suspect there are more in Serbia. Most of these, regarding the Balkans, are in Bosnia-Herzegovina," he said. The spiritual leader of the "Hizmet" school, Fetulah Gulen has established sites in more than 100 countries worldwide, Russia being one of the few countries that refused permission for the organisation's institutions to open there. In the Balkans, there are 10 Gulen schools in Macedonia, seven in Bosnia-Herzegovina, and four in Kosovo.(ANSAmed). http://world.einnews.com/article/351116948/My6TupVQDwLh0FpL?lcf=hVCmyq6j_BmREWnEZwcUjg%3D%3D
Posted by Gulen is a Fraud at 2:08 PM No comments:

October 26, 2016 (KHARTOUM) - Sudan’s Foreign Minister, Ibrahim Ghandour on Wednesday said that Khartoum has closed the schools linked to the Turkish opponent Fethullah Gulen in support to the Turkish government.
Turkish government accuses the U.S.-based Muslim cleric Fethullah Gulen of being behind the July 15 coup attempt in which at least 246 people were killed. But, the exiled Islamic opponent denies any involvement in the aborted putsch.
Speaking at a joint press conference with his Turkish counterpart Mevlut Cavusoglu in Ankara, the visiting Sudanese top diplomat stressed that the security of Turkey is a red line for the Sudan.
“The closure of schools inked to the Turkish opponent Fethullah Gulen was done in support to the Turkish government and people after the July 15 coup attempt,” said Ghandour.
The minister pointed that the Sudanese Ministry of Education is now supervising the two schools and would decide on how to manage them. He noted that a delegation from the Turkish Ministry of Education will visit Khartoum to discuss the matter.
On 4 August, Sudanese President Omer al-Bashir has issued a decision to close all the businesses in the country linked to the Turkish opponent Fethullah Gulen who is accused of orchestrating a failed coup in July.
The decision was announced in a less than a week after a call by President Recep Tayyip Erdogan to the Sudanese authorities during his address by telephone to a rally organized in Khartoum in support of his government on Sunday 7 August.
At the time, Sudanese Ministry Foreign Affairs spokesperson, Garib Allah Khidir, pointed that the Turkish government had urged to close Gulen-linked schools. He said that his government decided to turn the two schools where over 800 students study into private schools managed by a Sudanese company.
The Sudanese Minister of Foreign Affairs further announced the expulsion of Gulen-inked persons.
Ghandour expressed his satisfaction with the level of the bilateral relations between Ankara and Khartoum, saying that the two countries could further develop their relations in various sectors.
Ghandour went to say that his country hopes to benefit from the Turkish economic success and experience.
“There are several Turkish investors in Sudan but we look for more,” stressed Ghandour, adding that Sudan and Turkey have formed a joint political advisory committee.
He pointed that the Turkish Foreign Minister Mevlut Cavusoglu will visit Khartoum at the beginning of next year, saying that Turkey has supported Sudan in various international forums.
Last Monday, the Sudanese Ministry of Foreign Affairs said that Ghandour will hand a letter from President al-Bashir to the Turkish President Recep Tayyip Erdogan and will also meet the Turkish Prime Minister Binali Y?ld?r?m.
Following a meeting with the President Erdogan, Sudanese foreign ministry Wednesday said that Erdogan received Ghandour who handed him a letter from al-Bashir.
It further said that the Turkish president accepted an invitation extended by al-Bashir to visit Sudan during the first quarter of the next year but no specific date was agreed.
Sudan and Turkey have strong trade and economic ties. Turkish companies invest over $300 millions. In 2015, the volume of trade between the two countries reached $ 450 million USD Dollars in 2015 (export to Sudan: $424,6 million; import from Sudan: $24,6 million), according the Turkish foreign ministry.                                                             . 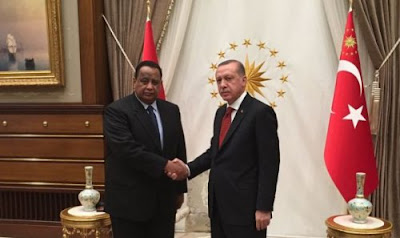 Two presidents agree to close down Gulen schools in Sudan

http://www.sudantribune.com/spip.php?article60665
Posted by Gulen is a Fraud at 1:04 PM No comments:

Turkey has asked India to shut down schools linked to Fethullah Gullen — the second time the country has made such a request in its attempt to bring down the cleric it accuses of masterminding July’s failed coup.

Turkey’s Development Minister Lutfi Elvan — currently on a state visit to India — said after his meeting with Home Minister Rajnath: "Unfortunately, in India too this terrorist organisation has organised themselves. They (the Fethullah Gulen Terrorist Organisation) have got four schools, one international school and a college and they are organised in Delhi, South Delhi, Hyderabad and Kolkata. During our meeting we also had the opportunity to discuss this with Minister (Singh) about the preventive measures to be taken against this terorist organisation," Lutfi said.

Turkey's crackdown since rogue soldiers tried to seize power on July 15 has alarmed Western allies and rights groups, who fear President Tayyip Erdogan is using the coup attempt to crush dissent. More than 100,000 people have been sacked or suspended and 37,000 arrested over the past three-and-a-half months.

Ankara wants the United States to detain and extradite Gulen so that he can be prosecuted for having engineered the coup to overthrow the government. Gulen, a former ally of Erdogan who has lived in self-imposed exile in Pennsylvania since 1999, denies any part in it.  — Agencies

http://indianexpress.com/article/world/world-news/feto-infiltrates-india-turkey-all-you-need-to-know-about-fethullah-gulen-terrorist-organisation/
Posted by Gulen is a Fraud at 1:13 PM No comments: