ISLAMABAD: A court has sought explanation from private educational institutes’ watchdog and a private school for adopting discriminatory fee structure and directed the school administration to allow the student to attend classes till further orders. The Islamabad High Court on a petition on Thursday summoned officials of the Private Educational Institutions Regulatory Authority (PEIRA) and the management of Pak-Turk International School on October 10 for adopting a discriminatory fee structure. The petition has been filed by Dr Kamranullah Khan against the school’s Chak Shahzad campus management for refusing to implement PEIRA’s directive to adopt a uniform fee structure which according to him is discriminatory. According to the complainant, the school charged Rs11,760 as monthly fee from his son, a third grader, compared to Rs6,500 some of his class fellows are asked to pay. He stated that he asked the school management to rationalize the fee structure which they refused. Dr Khan complained to PEIRA who ruled in his favour and directed the school management to implement a uniform fee structure. The directives of the regulatory authority were not only defied by the school management, his son was barred from entering the school premises. Despite receiving PEIRA’s directives, the school administration harassed my son when he went to school on September 5 after summer vacation. Without intimating the parents, they forced the boy to wait at the gate for seven hours in scorching heat without providing water or food, the applicants stated. “The school threatened me of dire consequences if I made further demands to curtail the fee,” alleged Khan who approached the Chak Shahzad Police Station to lodge a complaint against the school management and subsequently moved the court. The applicant has contended that many of his son’s class fellows pay Rs5,000 to Rs6,500 per month but he pays a higher fee for his son, which is unjust and discriminatory. He said when his son was admitted to the school last year in grade two, he was charged Rs10,500. After one year, the fee was increased to Rs11,760, an increment of 12 per cent. When the school management was contacted to get their version, they rejected the allegations, claiming that the complainant had tried to pressurise them to reduce his son’s fee. They contended that the petitioner had signed a form agreeing to all the terms and conditions. He applied for a fee concession and he was given Rs3,500 reduction. But he tried to have the fee waived off and used abusive language when he met the school principal along with his wife. On the charge of disallowing the student to enter the school premises, they said the boy was allowed to enter the school premises after the parents dropped him off and sat in a classroom. An official said that the school management gives scholarships to over 200 deserving students. Published in The Express Tribune, September 14th, 2012.
Posted by Gulen is a Fraud at 6:28 PM No comments: 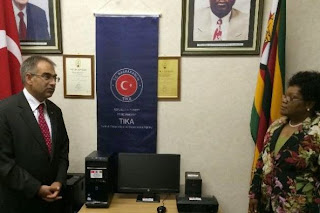 This Gulen Educational fund in Zimbawae Africa uses SAME name as the Horizon Schools in Ohio, Illinois Turkish Schools in Zimbawae A TURKISH investor, Yuksel Bayrak, was allegedly swindled of over $100 000 in a fraudulent land deal by local prominent business people in a matter that has sucked in the University of Zimbabwe (UZ) and stirred a nasty diplomatic tiff between Harare and Istanbul. CHARLES LAITON Bayrak, who is Horizon Educational Trust director, was allegedly duped into buying a non-existent piece of land for the construction of a primary and secondary school by businessman Louis Chidzambwa and chairman of the Harare West Development Trust Michael Mujeyi. Bayrak is regional representative of the Confederation of Businessmen and Industrialists of Turkiye, Tuskon and also a representative of Turkey’s biggest non-governmental organisation, KimseYok Mu, accredited by the Economical and Social Council of the United Nations (ECOSOC). Chidzambwa and Mujeyilast week appeared before Harare magistrate Donald Ndirowei charged with fraud and were remanded out of custody to August 26 on $500 bail each. Allegations against the two men are that in early 2012, Bayrak met Mujeyi after he was introduced to him by one Marah Hativagone, former president of the Confederation of Zimbabwe Industry (CZI). The State alleges Hativagone told Bayrak that Mujeyi could assist him in obtaining a piece of land to build primary and secondary schools in the Westgate area. Chidzambwa and Mujeyi, it is alleged, took the Turkish investor to Stamford and Goodhope Farms owned by Duncan Lawrence Annott along Lomagundi Road in Harare where they asked him to choose from two pieces of land measuring 20 hectares each and he chose one at Goodhope Farm. The two men then asked Bayrak to pay $50 000 for the land and $10 000 to Mujeyi for facilitating the deal. Mujeyi, it is alleged, then produced a document he titled “Proposed Funds Disbursement Plan” and promised that the agreement and title deeds for the land would be ready in two months. Bayrak, it is alleged made the payment through the two men’s personal accounts between September 12 and October 19, 2012. The State alleges, early March last year, Chidzambwa and Mujeyi again approached Bayrak and told him the land needed to be surveyed first before any development took place. They asked him to pay $40 000 into the UZ’s Department of Geo-informatics and Surveying to facilitate the land survey to which he allegedly complied on March 5 last year. The alleged offence came to light on May 24 this year when Bayrak made follow-ups and Arnott informed him that the land in question had never been put up for sale.
Posted by Gulen is a Fraud at 1:51 PM No comments:

Posted by Gulen is a Fraud at 2:21 PM No comments: