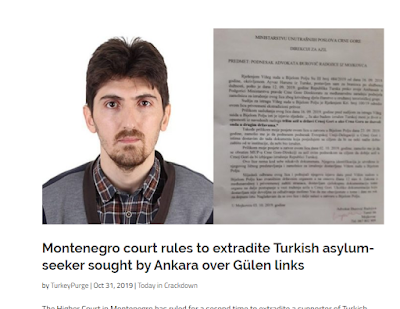 The Higher Court in Bijelo Polje has again ruled to extradite Gulenist movement member Harun Ayvaz to Turkey, where he is wanted for alleged terrorism offences.
The ruling, made on October 14, came after the Podgorica-based Appeal Court overturned the Bijelo Polje court’s previous decision which said that Ayvaz should be extradited to Turkey.
Dalibor Tomovic, a human rights lawyer who is now representing Ayvaz, told BIRN that he will challenge the latest ruling.
“I officially received the case yesterday and we will appeal the decision in the next three days,” Tomovic said.
Tomovic argued that the decision was not in line with Montenegro’s constitution or international law.
“With this decision, the higher court in Bijelo Polje accepted the reasoning of Turkey for extraditing Ayvaz. The reasons include that the Gulen Movement is a terrorist organisation, and having account at Bank Asya is a proof of being a terrorist,” Tomovic explained.
According to his wife, Ayvaz is accused of having a subscription to the Gulen movement’s Zaman newspaper, of using the Bylock application on his phone, which a Turkish court has ruled is a sufficient proof to link a user with the Gulen movement, and of depositing money into an account at Bank Asya – a bank with connections to Gulen.
Tomovic alleged that Montenegro is keeping Ayvaz in custody for political reasons.
“Everyone knows that he is in prison because of political reasons and even the court advised him to apply for asylum but now they are accepting Turkey’s demand for his extradition,” he said.
If the Appeal Court in Podgorica now rules that Ayvaz can be extradited, the Justice Ministry will make the final decision on whether to send him to Turkey or not.
However, Tomovic said that Ayvaz also has a parallel application for asylum, which he submitted on October 24.
“Even if the Appeal Court and the Justice Ministry decide to extradite him, they have to wait to hear the final decision about Ayvaz’s asylum application,” the lawyer explained.
The Turkish government accuses Gulen, who lives in self-imposed exile in the US, of being behind a failed coup attempt in 2016.
After the coup attempt, it started to refer to Gulen’s movement as the ‘Fethullahist Terrorist Organisation’, or FETO for short.
Since then, Ankara has arrested tens of thousands of people, fired hundreds of thousands from public service jobs and closed down thousands of companies, NGOs and educational institutions because of their alleged links with Gulen.
Recep Tayyip Erdogan’s government has strongly urged Balkan states to hand over alleged Gulenists and to close down any institution related to the Muslim cleric’s movement.
Most have resisted the Erdogan government’s call for extraditions, but the Turkish intelligence agency has been involved in two controversial operations to send back Gulenist suspects from Kosovo and Moldova, which sparked political rows in both countries.