*Please note this is a direct quote from a Turkish newspaper friendly to President Erdogan. FETO refers to the Fethullah Gülen movement, which has been banned by Turkish authorities.

A Cambodian company bought all the schools linked to Fetullah Terrorist Organization (FETO) in the country in November, a Turkish education foundation said on Tuesday.
Turkey’s Maarif Foundation (TMV) said that Zaman University and its four affiliated schools linked to the FETO were bought by a local firm and renamed as International Paragon University, as part of a cooperation in the fight against FETO, the terrorist group behind the 2016 defeated coup in Turkey.
During his visit to Turkey in October, Cambodian Prime Minister Hun Sen assured Turkish President Recep Tayyip Erdogan of his country’s cooperation in the fight against FETO.
The two countries also signed a cooperation deal in the field of education. The agreement came into effect on Dec. 11. 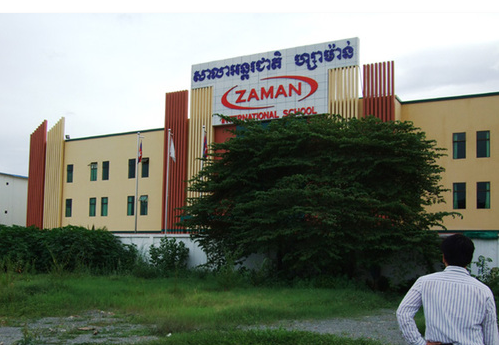 TMV board visited Cambodia after Sen’s visit to Turkey in October and warned the Cambodian foreign and education ministers of the FETO threat.
Cambodian officials told Turkey that there is no Turkish national studying or teaching in the schools and that all of them have already left the country.
FETO and its U.S.-based leader Fetullah Gulen orchestrated the defeated coup of July 15, 2016, which left 251 people martyred and nearly 2,200 injured.
Ankara also accuses FETO of being behind a long-running campaign to overthrow the state through the infiltration of Turkish institutions, particularly the military, police, and judiciary.
https://www.aa.com.tr/en/asia-pacific/feto-linked-schools-closed-in-cambodia/1348603
A second source: http://www.anews.com.tr/world/2018/12/25/feto-linked-schools-closed-in-cambodia
Posted by Gulen is a Fraud at 6:35 PM