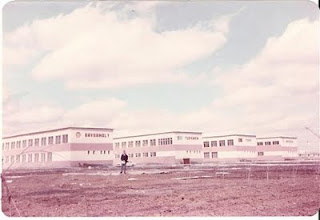 The Turkmen-Turkish high school of Bayramaly. (the Turkman-Turkish high school of Bayamaly- Photo from Wikimapia)
http://wikimapia.org/5963646/tr/Bayramali-Turkmen-Turkish-High-School
Editor’s note: The Turkmen authorities have been slowly but systematically shutting down or otherwise changing the status of the Turkish system of secondary schools in the country, reports neweurasia’s Annasoltan. She talks with a representative of the schools and students who know them well to discern the government’s motivations.
It began with students from Turkmen-Turkish secondary schools in Turkmenistan complaining in chat forums that their schools were no longer accepting new students. Then this past summer, what initially appeared to be nothing but nasty gossip about the closing down of several Turkmen-Turkish schools throughout the country later proved to be unfortunately true. For the remaining Turkmen-Turkish schools, boarding options were altogether eliminated. That means Turkmen pupils were (and remain) no longer allowed to stay overnight at these schools. Now a source close to the Turkish government has now confirmed to me that the schools are on their way to closing down entirely.

About a dozen schools in Bayramaly, Tejen, Atamyrat, Balkanabat, Koneurgench and elsewhere are being affected. Only five of the high schools located in the five provincial centers are going to be maintained, at least for the time being. All others are due to close their doors permanently once all of the students have finished their studies. The Turkmen-Turkish University remains unaffected (note: the rector of the university is, as before, Turkish).
As indicated above, the mass closing has evidently been going on for some time already, and in a very systematic fashion. Besides the changes already mentioned, the schools’ Turkish directors were exchanged with Turkmen ones.
This development has been hushed up in the strictly government-controlled Turkmen media. Meanwhile, a representative of the Turkmen-Turkish schools association in Turkey who wishes to remain anonymous was hesitant to call it a “closing” per se. In the least, a status change is occurring, as the remaining schools are being taken over by the Provincial National Education Ministry Directorate. The representative explained to me:
“A hundred percent localization is taking place. A new generation of well-educated, conscious and decent Turkmens has grown up in these schools and in the schools of Turkey. Local teachers are replacing Turkish teachers in mathematics, physics, chemistry, biology and computer science. Most of the teachers are now Turkmens. That is a natural process that was expected over time.”
I’ve gathered from various sources and remarks on the Turkmenet that the Turkmen authorities may have wanted to close some of the schools immediately in order to turn them into hospitals. However, the Turks labored to convince them that if they did so, schools’ interiors would be “wasted”. The pace of the closings suggests that this argument was somewhat successful.
Destroying a generation
The closings/change-in-status parallels a trend in neighboring countries, particularly Uzbekistan, wherein all Turkish schools were closed in 2000 as part of a diplomatic crisis with Turkey. However, internal factors peculiar to Turkmenistan may have played a role, as well.
The atheistic political establishment is fighting religious influences. As part of that, the authorities are increasingly growing intolerant of Islam and are becoming suspicious of any foreign presence in the country. I’ve previously reported that alleged private lessons given by Turkish teachers to their Turkmen pupils on Islamic principles and rituals proved especially irksome. However, the suspicion of outsiders extends beyond Turks: for example, Peace Corps volunteers have been denied entry visas, while Medecins Sans Frontieres and the Russian mobile phone provider MTS have been unceremoniously kicked out of the country.
The end-results could be a small disaster for my nation’s best and brightest. The education system here is even weaker than in other Central Asian countries. Good teachers and teaching materials are in short supply, the official ideology is omnipresent, and corruption is widespread. The Turkish schools, which were first opened in 1991, represent the best opportunity for quality education. They have produced some of my nation’s most talented graduates who have won prizes in international education contents and have climbed the ranks of society to attend some of the best universities and get the best jobs in Turkey and elsewhere.
Their success, and evidently, their current crisis, lies in the fact that they have been teaching Western-style modern science and a good level of Turkish and English. Although the teaching of Islam has not been allowed, the students have nevertheless learned how to pray and live like a modern Muslim (the schools are connected to the Nurcular movement, one of the main religious organizations in Turkey, as well as to Fethullah Gülen, who lives in self-imposed exile in the United States. Gülen is a controversial figure in Turkey, but his educational network has spread across five continents,)
As Turkmenistan’s authorities quietly move to shut down the system of Turkish secondary schools,

Email ThisBlogThis!Share to TwitterShare to FacebookShare to Pinterest
Labels: Turkish schools in Turkmenistan to CLOSE